Dortmund. A “Melting Pot” in the Ruhrgebiet. People from all kinds of different cultures live in cramped confines and turn this region into a special place. Whether from Eastern Europe, the Mediterranean or Asia, foreigners have travelled to this metropolis for all kinds of reasons. Most of them, such as Polish and Turkish immigrants came to look for work. Others fled from their home countries due to dictatorships, corrupt governments or civil wars. One of the latter groups is the Tamil community in Dortmund.

Rasiah Thillayampalam immigrated in the 1990's to Germany

By Miryam Nadkarni and Julia Weiß

The Tamil Rasiah Thillayampalam migrated from Sri Lanka to Germany in the 1990s with his wife, one of his daughters and her husband. He was the father of ten children, most of whom decided to flee to different countries during the civil war (1980-2009).

Tamils live in South-East India and in the North of Sri Lanka. Their religion is Hinduism and they speak Tamil, an ancient language whose literature has existed for over 2000 years.

Life in Germany was not as easy as any of Rasiah Thillayampalam’s family or other Tamil immigrants had imagined it to be. False expectations caused by Hollywood movies had made them dream of wealth and a good life.

„If you want to do anything in Sri Lanka you just go for it. In Germany you have to fill in a thousand forms. German bureaucracy is crazy,“ says Gowreswaran Wijeyarajah, son-in-law of Rasiah. Most Tamils who came in the 1980s and after had to wait for years to get their asylums granted. 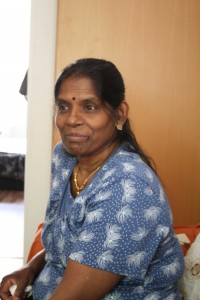 “During this period”, says Jeyakumaran Kumarasamy, leader of a Tamil-Culture-Centre in Dortmund, “the anxiousness of being expelled from Germany was mingled with our fear of being in a foreign country without work and not understanding the language.” For most of these immigrants did not receive language courses until they were allowed to stay in Germany permanently. In these troubled times, keeping contact with other Tamils in Dortmund was one of the main things that kept these people going. Maintaining their culture and their religion strengthened their identity in this foreign country. “Many of us hoped that our stay in Germany would only be temporary,” says Jeyakumaran Kumarasamy. However, when it became clear that it was unlikely that they could return to Sri Lanka in due time, many of them chose to move to bigger communities than the one in Dortmund. From approximately 1000 Tamil families that used to live there, only 450 remain.

Rasiah Thillayampalam’s family is one of them. Far from thinking about leaving they started taking part actively in the Tamil community: 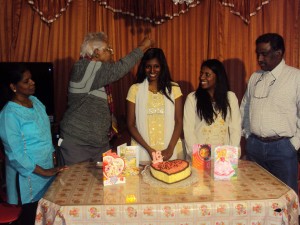 Pruntha gets a blessing from her grandpa on her 16th birthday

Rasiah who was around 70 years old at the time of his arrival in Germany stopped working as a professor and decided to commit his time and energy to fortune-telling, a very well-respected profession with the Tamil people. His son in law, Gowreswaran Wijeyarajah, found a job and started working as a craftsman. Both of them helped to build a new Hindu temple in Dortmund. After six years of voluntary work, the Temple was completed in June 2010 and opened to the Tamil community.

Rasiah’s daughter, Srithayaruby Gowreswaran, decided to give birth to her children in Germany. Pruntha and Namartha are now 16 and 17 years of age respectively. They go to a German school during the week and to a Tamil one on Saturdays. Here they learn how to read and write Tamil. Moreover, they take subjects such as geography and music, which are designed to give them a better understanding of their family’s culture. When meeting friends they walk around in jeans and T-shirts; when going to a Hindu Temple with their parents they drape themselves in saris. They eat Bratwurst in town and Pattis (small pasties) at home. In summary, they are typical of a second generation of immigrants: living a Western life but believing in and respecting their parents’ culture.

For Tamils spending time with their relatives is very important. Therefore the whole family suffered immensely when Rasiah’s wife and beloved grandma of Pruntha and Namartha had to leave Germany due to sickness almost 10 years ago.

In 2009 the civil war in Sri Lanka finally ended. For the first time in 20 years, the family can now go back there. Pruntha and Namartha have never seen where their parents grew up and will finally be able to meet the rest of their family.

Unfortunately, their grandpa cannot go with them. He died on the 3rd of May 2010 – 2 months before he was going to be reunited with his wife and other children in Sri Lanka.