Imagine, you lived in a warm, happy family where the members respect and love each other, where trust is self-evident and where you can talk about every concern you have except the one that bothers you most. “Keeping a secret of this extent destroys you. It can make you want to jump from a bridge.” 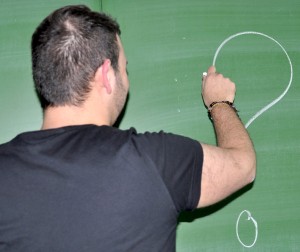 Sergan, 22, studies history and chemistry at the University of Bochum. He does not want to be identified.

By Lina Friedrich and Natalie Klinger

“Sergan”, who does not want to use his real name, is gay. His friends know it, his fellow students also, but he said his father would abandon him if he found out. It is against the social norm in Muslim societies to love people of the same sex.

No outing in the family

When Sergan reached puberty he knew that he was different. Assuming that he was gay he tried not to listen to Madonna albums, not to wear pink shirts and not to do the feminine hand waving while talking. Sergan tried hard not to conform to any cliché linked to homosexuality.

Click to listen: Sergan about coming out in the family and hiding during puberty.

He was afraid his family would sense his difference. He was afraid of them accusing him of not respecting the traditional role he should take in the family. At the age of 16 he could not take it anymore. But Sergan couldn’t find the words to tell his mother  and he finally gave up. However he suspects she may have figured out what he was trying to say.

Homosexuality and the Koran – no contradiction

Still there was religion to help Sergan dealing with those struggles. Against general assumptions the Koran does not prohibit homosexuality. Stefan Reichmuth is professor of Islamic Science at the University of Bochum (RUB): “The only passage where it is referred to is the story of Lot and his people, adequately to the legend of Sodom and Gomorrah in the bible. Lot blames the men of his folk to consort with each other“. But the legend leaves many questions unanswered.

“Interpreters note that it is neither explicitly stated that the men actually have sexual intercourse nor is raping mentioned“, says Reichmuth. Moreover the legend would specify on married men and therefore could not be established as a general basis for the punishment of gay love.

Nevertheless sodomy is punished with whipping in the Koran and with stoning under Islamic law. Despite western influences on Islamic culture there are still cases where people are executed for having gay sex.  In Iran gay love is still forbidden under penalty of death. In 1998 the news agency Reuters reported that in Afghanistan two men confessed to having sex and were buried alive.

It is especially the passive part of a gay couple that Muslim societies disapprove of. “The active part is considered rather male, the passive one female which makes it a temperamental aberration“, says the Reichmuth.

Stefan Reichmuth is professor of Islamic science at the University of Bochum. In Germany as an immigration country Islamic science has become of major interest within the last few years.

But if you take a closer look it is not the religion that creates the incompatibility between Muslim culture and homosexuality but the policy, socially constructed values, and the patriarchal structures of the families in Muslim countries.

“Our family structure can be compared to a predestinated painting where you have to take the place that’s reserved for you“, says Vurat , 22, from Bochum, who speaks from his experience. As his parents are living in Turkey he does not have to hide his homosexuality in his everyday-life. But high expectations of his family put pressure onto him . “In traditional Turkish families you don’t talk about identity issues.”

Click to listen: Vurat about the strict Turkish identity

The patriarchal structures are the main reason for identity conflicts of gay Muslims, knows Patrick Dörr from the students’ gay  organization of the RUB. With his work he tries to strengthen the rights of gays at the university. “The father’s limitless authority is still valid when the son is an adult. Sons should be obedient and are not allowed to move out before they’re married. It’s not the religion that causes the trouble.” Therefore both Vurat and Sergan were able to find their own interpretations of belief.

Vurat tries to disassociate himself from any social norms that do not derive from the Koran, for instance death penalty. The discrimination of gays also fits that category. “I definitely believe in God and as far I interpret it there’s no contradiction between my religion and my sexual orientation“, the student says.

The Islam proved as a solid constant for Sergan not only when searching for his identity but also when his mother died. The 22-year-old is religious as well and does not think that God would punish him for being gay. Now that his mother is dead his family will probably never know about his secret as he is concealing from his father, a common strategy for gay Muslims.

Vurat says it's only communication between the generations that will help solve the problems encountered by gay Muslims.

Indeed, Vurat’s family does not question the traditional Turkish role models as well. “You just don’t talk about breaking out of these generally accepted ideas. It’s a taboo“, says Vurat. The way these two Turkish families deal with that topic is typical within Muslim societies. “Actually it is very common to banish the son from home. If he ever gets integrated again the consent is concealment“, explains RUB’s gay’s representative Patrick Dörr.

Gay Muslims with a migrant backgrounds who live in Germany have to suffer from even more difficulties. It is not only their families they have to explain themselves to but also their friends and fellow students. “The problem that arises is that Turkish people define themselves by their families instead of their jobs, social identity is more important than the personal one”, Patrick said.

Germany with its highly individualized society is very different from Turkey. In a relationship between a gay Muslim and a German gay the latter might criticize his boyfriend for not moving out although he is having trouble at home. Dörr knows these difficulties, “Gay Muslims always have to justify why they behave the way they do. That can have a great impact on their psyches”.

No wonder Sergan refers to jumping from a bridge when describing his feelings.