“Yesterday was a good day, as I got a job”, says Ayham happily. The 52-year old Bulgarian has been coming to Germany on a regular basis for more than twenty years, this time around he has been here since summer of last year. He came here with almost a dozen other Bulgarians: “All of us travelled together by bus, it was a long and tiring journey.” In the past, he tried to apply for asylum in Germany, albeit unsuccessfully. 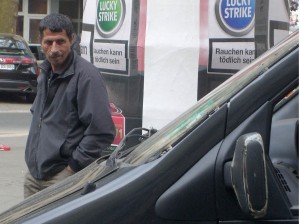 Maybe the next employer?

During that time of seeking asylum, he had a language course to learn German. That was another language he was able to add to his impressive tally of the other tongues he speaks: Bulgarian,Turkish and Russian. But since 2007 – when Bulgaria joined the European Union – he does not need a special permit to stay here. Hence, he tries his luck as a day labourer in Dortmund’s Nordstadt. The money he earns is for his family back home in Plovdiv, the second largest city in Bulgaria.

As a part of the Turkish minority in his native country, he has got no chance of getting a job back home, he says. “If your name is Nikolai or Georgi, you don’t have a problem in Bulgaria. But if you’re called Hassan or Ali, then you get no chance.” And even if you have a job, the wages are too low to support a family. That’s why his elder son, Deniz, has also left Bulgaria to seek a job opportunity elsewhere.

Currently, 25-year old Deniz is staying with his father in Dortmund – mainly as a vacation, but also to help his father with his jobs. Normally, Deniz works in Paris for Gaz de France, one of the biggest gas companies in France. He supports his father financially with the money he earns there. A support that Ayham desperately needs: because he is older than most of the other day labourers, his job chances are even worse and the rent for the flat he is staying in is 500 Euros a month. He does not get on well with his landlord, hence he was reluctant to show us the flat, which he currently shares with his son and two other Bulgarians. In the meantime, Ayham has gone to Paris with his son.

When and if he returns to Dortmund is still uncertain.