Praying to the Football God…

…is not really effective. “Totale Offensive” promotes christian values instead of football fever.

How Dirk Haslinde, the founder of “Totale Offensive”, conquered his addiction to alcohol.

What’s behind the punching fists 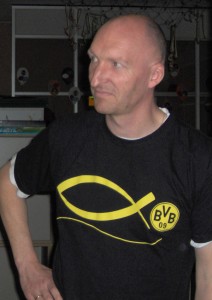 Oliver Römer had problems with violence as a teenager

Oliver Römer went to the stadium every week. And actually he only wanted to watch football. He had a seasonal ticket and was a huge fan of Borussia Dortmund. Football was not the reason for him getting into a brawl after a match one day. Oliver was frustrated about his parents’ separation, he was trying to get attention, sought to provoke – and, after all, his friends also joined in the fight. At the end of the day, the then 16 year old found himself at the police station. Looking back, that was the best thing that could have happened to him. “Being arrested was a wake-up-call”, Oliver says today. After that, he stopped seeing his old friends and started volunteering at a catholic church where he became a Christian. Today, Oliver Römer is a member of the Christian BVB fan club “Totale Offensive” and fights against violence in the stadium.

Brawls among football fans – an old story also well known in Dortmund. There have always been fights at the stadium – especially at games against rival FC Schalke 04. The BVB and the police are trying to solve the problem by positioning more and more security staff and police officers at the games as well as by appealing to fans to stop the violence. Fans who are caught during fights are banned from the stadium. But the football club and the police also want to fight the cause of the problem. It’s not only the traditional rivalry between football clubs that leads to brawls – that’s clear to everybody. But what is it that makes football fans beat up each other at games?

Violent fans are banned from the stadium

“The concept of the enemy as fans of other football clubs is very common – but in reality the violence is caused by social problems, by a lack of perspective”, thinks Oliver Römer. Petra Stüker, the coordinator of the BVB fan clubs, agrees: “We do have problems with young fans, about 16 to 20 years old, who don’t know what to do with themselves. Many of them have social problems, such as being out of work or maybe even homeless. When they are drinking alcohol, things tend to get out of control.” Peer pressure adds to that since many young people only come to the stadium because of their friends, Petra Stüker states.

“Totale Offensive” tries to get to know those people who they believe need help. Therefore the members offer public screenings of football games where no alcohol is served. They also go to the stadium together. “Football is an easy way to reach people. We want to submit values to them”, says Oliver Römer. By Values he especially means Christian ones.

Borussia Dortmund also tries to solve social problems underlying the violence. Like every German town with a premier league football team, BVB employs social workers since 20 years. Those social workers are talking to fans who have been caught during fights and are offering them help in solving personal problems such as addictions.

However, a spokesman of the police in Dortmund says that there are multiple causes for violence in the football stadium: “Not everybody involved in brawls is socially deprived or has social problems. We also know attorneys who go to work regularly during the week and look for fights in the stadium at the weekend.” Sometimes, alcohol plays a role in those clashes – but that’s not always the case. Experience showed to the police that when fans go to football games planning to get into fights they most of the time stay sober intentionally. Those fights are mostly quick but even more violent, says the police spokesman. “Beating is sport for those people.”

Borussia Dortmund tries to avoid clashes between rivalling fans by preventing them from directly meeting each other. Therefore different fan groups are placed in separated parts of the stadium. That is part of a guide line of the German Football Association (Deutscher Fußball Bund). 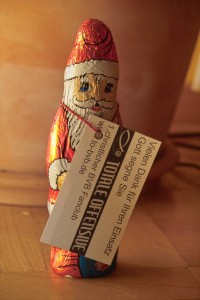 However, Totale Offensive seeks to tear down barriers between rivalling football clubs by getting to know with other fan clubs. They even met with the Christian initiative “Mit Gott auf Schalke” (In Schalke together with god) of rival Schalke 04. But it is not only between opposing fans that TO tries to build bridges, but also between fans and the stadium security. On Easter and St. Nicolas’ Day they give chocolate to security staff and police officers in the stadium to show their appreciation for their work.

After many talks, a lot of fans have realised that violence at football games leads to nowhere, says Petra Stüker. In the last season there have been fewer clashes than the season before. Oliver Römer also believes that the key to success is talking to violent fans and not permanently banning them from the stadium. Because this way – like in his case – they might come to the stadium just because of football one day.